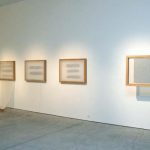 The work is displayed as part of the permanent exhibition

Sculptural installation in 5 parts
Tulle, wood, charcoal, colour, mirror
Variable dimensions
Donated by the “Friends of the EMST” and by the artist, 2007
Inv. No. 579/07

Theodoros, sculptor, constitutes a unique case of an artist, who employed conventional sculpting mediums in parallel with the emerging mass media of communication, along a period of time spanning from the 1950s to 2018, both in Paris and Athens. As of the late 1960s his artistic practice focused on a systematic dialogue between sculpture and the various media dominating popular culture and entertainment: press, radio, television, and theatre. Through this deliberate juxtaposition, he aims at highlighting and reinforcing the inherent qualities of the language of sculpture, and also at undermining the cultural totalitarianism characterizing the society of the spectacle. His work titled Manipulations-Antispectacular, 1974, also known as “anti-spectacular screens” makes for an eloquent token of this dialogue. The five sculpted screens placed side by side function as a comment on the specific frameworks and limitations of television and the communication that the latter makes possible. The screens’ shapes, the materials they are made of, the questions showing on their surfaces, all work together to articulate this very comment. Aspiring to achieve a truly bi-directional communication between artist and audience, when Theodoros showed his screens for the first time, he provided the audience with a questionnaire in which everyone was asked to write down their ideas about the creative process, the reception, and the institutional framework of art. Theodoros presented the Anti-Spectacular Theater: Two sculptural one act plays – Elegies of the Homo Faber, 1976 before the audience of Marieta Rialdi’s Experimental Theatre. The event consisted of two parts, which had been partially developed and performed during the period 1973–1974. During the event Theodoros focused on the structural characteristics of performance: through a succession of ritualistic gestures and their didactic explication with chalk on a blackboard, the artist compares dialectically the sculptural act to the practice of performance and the passage from the creative act to the produced object, making a critical comment on the institutional conventions of perceiving and presenting a work of art. The installation bearing the same title comprises cubical metal boxes inside which Theodoros sealed the relics used in and produced during the performance, the blackboard, and also the poster announcing the event. In Theodoros’ view, art, and especially public sculpture, is inextricably interrelated with the society that creates it. The artist himself had assumed a critical stance towards this relation, which he expressed by introducing the “Matraque-Phallus” symbol in his work. In this phallic anthropomorphic conception of his, we witness the symbolic coexistence of state, sexual, and artistic power, while the symbol’s form per se is a merging of the sculptor’s mallet (Arabic: matrakah), the police baton, and the phallus. As from 1968 and on, the sculptor incorporated this particular symbolic form in an array of installations, sculptures, and events, as well as in the work series titled Variations on a monument to the Known…. This series begun in 1970, during the Greek military junta, when the tortures inflicted on dissenting citizens illegally detained and imprisoned, as well as the names of the torturers themselves, started to become known. With each variation pointing to a different form of torture, Theodoros effectively realized a series of anti-monuments rebuking military force and forming a blatant contrast with the heroic representational language of monuments dedicated to the “Unknown Soldier”.
Stamatis Schizakis, text from the permanent exhibition guide ENTER EMST : Collection & History, A short guide, 2020